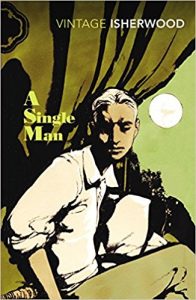 There are only 152 pages of generously spaced print to my edition of this novel, and yet a great deal more is said than can be contained by its calculated length. The concision with which Isherwood conjures the universal from the mundane is remarkable.

One passage of dialogue immediately appealed to me in the way it captures the clumsy subtlety that can be achieved when speaking out of deep feeling. Here George, whose partner has died, is having a drink with his friend Charley, whose son Fred wants ‘a complete break’ and has left home.

‘I suppose, in a day or two, I must get around to cleaning out Fred’s room.’

‘I mean, until I’ve done that, I won’t feel that everything’s really over. You have to do something, to convince yourself. You know what I mean?’

‘I shall send Fred anything he needs, of course. The rest I can store away. There’s heaps of space under the house.’

‘Are you planning to rent his room?’ George asks – because, if she is leading up to something, they may as well get to it.

‘Oh no, I couldn’t possibly do that….Well, not to a stranger, anyhow. One couldn’t offer him any real privacy. He’d have to be part of the family – oh dear, I must stop using that expression – it’s only a force of habit….Still, you understand, Geo. It would have to be someone I knew most awfully well –’

‘You know, you and I – it’s funny – we’re really in the same boat, now. Our houses are kind of too big for us, and yet they’re too small.’

‘Depending on which way you look at it.’

‘Yes….Geo darling – if I ask you something – it’s not that I’m trying to pry or anything –’

‘Now that – well, now that some time has gone by – do you still feel you want to live alone?’

‘I know you didn’t. That’s perfectly all right.’

‘Of course, I know how you must feel about that house of yours….You’ve never thought of moving, have you?’

She reaches over and gives his hand a long squeeze of deep understanding. Then, stubbing out her cigarette (brave now, for both of them) she says brightly, ‘Would you like to get us some drinks Geo?’

The question that hangs over this conversation is never quite asked. The person who might move in would not be a ‘stranger’, ‘he’ would have to be ‘family’ – ‘you understand, Geo.’ Charley is saving face while giving everything away. We can be more complex than we seem, but often, too, we are simpler than we care to acknowledge.

I enjoy the irony of the ‘long squeeze of deep understanding’ that is what it is despite the irony, despite George, just prior to this conversation, having mused on how little Charley understands him. He recalls how her ‘sheer power of … unawareness that anything was wrong’ often drew he and Jim together again after a quarrel. They would be obliged to respond to her, and through her to each other. Though she may not always fathom George’s motivations, her goodwill stands under and supports them both.

Charley blunders towards and away from her question, and in doing so tells George, between the lines, her need for connection, rightly assuming the same need in him. George sees the question coming, is sure of his answer, yet is touched that it has been all but asked. He guides Charley through her attempt and gives his own squeeze of understanding by insisting on doing the dishes before settling down for another drink with his friend. Underneath Charley’s best laid plans and George’s intellectual insight lies something simpler.

Writing this I am reminded of a wonderful poem by Alden Nowlan that I recommend to you: He Sits Down on the Floor of a School for the Retarded.

But if Isherwood intends to point to the fundamental simplicity of human nature, he is also aware of its inconsistency. When Charley calls George to arrange the meeting quoted above he tells her the lie that he is busy. The brusqueness, antipathy even, with which he seems to cruelly brush her off! Though, in his early morning bad mood, sunk in grief for Jim, he is put off by her emoting, this is no barrier to his face flushing ‘with joy like a lover’s’ when he calls her back and finds she still wants to see him.

Yet while A Single Man is a realist novel, filled with excruciatingly recognisable psychological detail and fidelity to the most prosaic bodily concerns (a favourite line of mine is: ‘From time to time, as he walks, he emits quite loud prolonged farts.’), it at the same time describes a spiritual ascent.

George, the protagonist, begins by discovering himself: he wakes up. ‘That which has awoken then lies for a while … until it has recognised I’. He finds himself in time, time that passes, and he fears death. He remembers Jim and the pain of his loss. He rejects Charley. He thinks of the bigots who despise and persecute homosexuals like himself and entertains ugly and brutal revenge fantasies. He consciously puts on his public persona of College Professor, a performance that provides a buffer between his real self and the world.

As the day of his life which the novel is moves on (the day also a metaphor for life), these barriers between him and others, between him and his own self, are gradually worn down. The energy of the young lives of his students, Charley’s unsophisticated affection, his own secret stores of playfulness that were just waiting for him to get out of the way: these build up to a drunken spree in which he strips off his inhibitions and dances his self naked. At the close he learns – not much, but all that matters – ‘that he must live’ now.

As George falls back to sleep the narrator, who has so far largely kept his counsel, imagines his characters as rock pools, isolated in the day, but at night, and in the implied final sleep of death, washed over by a sea that makes them all one vast pool, ‘that consciousness which is no one in particular but which contains everyone and everything’.

Isherwood spent part of his youth in the Berlin of the Weimar Republic, revelling in the notorious but brief cultural and sexual liberation of the period, no doubt a boon particularly for a young gay man. The film and musical Cabaret was loosely based on stories of his inspired by that experience. Perhaps unexpectedly then, he became a devout Hindu, a student of Swami Prabhavananda, and devoted some years to collaborating with him on a translation of the Bhagavad Gita, of which he recorded a recitation.

The conflict of austere religion and lusty experience is only apparent. In A Single Man the stirrings of George’s sexual desire spur him to awareness of the presence of his body, of beauty, of the life that surges through him despite his sorrows, doubts or joys. The inseparability of our spiritual and bodily needs is hinted at throughout the book. Driving into the hills above his city George parks up and ‘looks out over Los Angeles like a sad Jewish prophet of doom, as he takes a leak.’