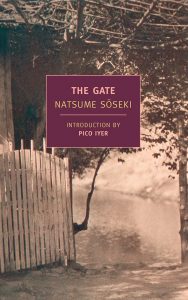 Soseki (1867 – 1916) is Japan’s favourite novelist, featuring on 1,000 Yen notes from 1984 – 2007. The drama that has so drawn generations of Japanese to his work is… very little. My first encounter was with an earlier novel, titled The Three Cornered World, or in a more recent translation, and more accurately, The Grass Pillow. In that book, a painter goes to the mountains and doesn’t paint anything, instead chatting to people and having a good wander around. It’s lovely.

Even its name, Kusamakura – The Grass Pillow – is discreet. A traditional idiom for a journey that only alludes to journeying, and then the least mobile part of it: sleeping by the wayside. The Gate (Mon) is similarly understated. The action that drives the plot in fact occurred long before and is described in flashback, but so delicately that I was unsure just what had happened. It may be that a Japanese reader would be better able to read between the lines – or that the confusion is central to the story, an evocation of the protagonist’s resistance to reflecting too closely on the decisive period of his life.

Sosuke, the protagonist, and his wife Oyone, are disapproved of by society and have withdrawn from it owing to the indiscretion of their marriage. Oyone was previously living with Yasui, a friend of Sosuke, whether as wife, lover, kept woman, or what is not said. In any case, the result is that they feel shame for the betrayal of Yasui, and Sosuke’s career prospects are limited by propriety.

The struggle of the couple, hesitating between striking out on their own path and honouring communal traditions, relates to that of their society. Soseki is held up as the great commentator on the Meiji period, during which Japan furiously modernised, ending feudalism, industrialising, and introducing universal education, among other things. The pace of change was enormous and the desire to stand on an equal footing with the dominant Western powers (whose depredations in China were taken note of) clashed with faith in tradition and cultural heritage.

Edith Wharton’s 1920 novel, The Age of Innocence, a Pulitzer Prize winner, charts similar turmoil in the upper classes of New York society at a similar time. Wealthy settlers imported their own standards of social conduct, creating an exclusive, incestuous remnant of European aristocracy which faded away in the early twentieth century. Her hero is engaged to an entirely appropriate young lady: beautiful, accomplished, rich, connected, unimaginative. He, like Sosuke, falls in love, in his case with a scandalously bewitching European divorcée, and is forced to choose between the dictates of society and of his heart.

In both books inaction is a key theme, but Wharton makes the moment of decision the climax of the plot, while Soseki places it far in the past, his story almost plotless and mirroring the unwillingness of Sosuke to plot his own life’s course. It is tempting to see in this a clear example of the contrast between Western and Japanese sensibilities, of how to Western eyes there is often ‘nothing happening’ (as Pico Iyer‘s introduction has it) in Japanese literature.

‘Sitting quietly, doing nothing.
Spring comes and the grass grows by itself.’

It may be that in the manner described by Basho‘s Zen influenced poem, Sosuke has done what is needful. However, we know that he is not satisfied. Tormented by shame and regrets, he visits a Zen retreat where he imagines enlightenment as a gate he knocks at. But he believes himself ‘destined neither to pass through the gate nor to be satisfied with never having passed through it.’

Nevertheless, in the ‘nothing happening’, the small domestic incidents, the quiet intimacies of Sosuke and Oyone’s life together, we have been made gradually aware of their deep love and connection. Is this the gate he cannot open? The awareness that he’s doing just fine? Their landlord and neighbour, who appears to have everything they want, but whose most obvious quality is his relish for what he receives, is a hint that their regrets blind them to their fortune.

The heroes of both these novels would have done well to listen to the ever delightful Kierkegaard, who in this passage nudges us with a positively Japanese delicacy toward the solution: