The Number and the Siren: A Decoding of Mallarmé’s Coup de dés 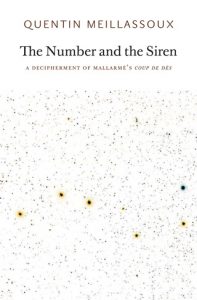 The Number and the Siren is unlike other books. Remarkably French, it combines literary theory with a Dan Brown-esque search for a code secreted in Stephane Mallarmé’s poem Coup de dés (A Throw of the Dice), notoriously resistant to interpretation, to reveal an atheist eucharist in which the reader participates with the author in an experience of our fundamental nature: Chance. With a capital letter, no less. Or, at least, this is what its author, provocative philosopher Quentin Meillassoux, wishes to be revealed.

His first published book, After Finitude, struck out in an apparently very different direction. It attacks all other philosophies as having ignored the scientific revolution by remaining in thrall to metaphysics, and so to idealism and religion. Even those philosophies that purport to be in the service of science fall into this trap, he says, because they attempt to formulate reasons why science works. This assumes some ultimate reason, but we can’t access an ultimate reason through reasoning because we can’t get outside of what we think, or reason, to see what grounds it. Therefore we simply believe that there is a reason why things are as they are, without being able to know what that reason is.

Meillassoux extricates us from the problem he diagnoses in a bold and straightforward way: ‘in reply to those metaphysical questions that ask why the world is thus and not otherwise, the response “for no reason” is a genuine answer.’¹ Yes, things happen for no reason at all. And therefore the things that happen could have been any other things at all. The one thing we know for sure is that anything could happen – the sun could disappear, you could become butterflies, I could want Manchester United to win the football league.

Preposterous I know, but Meillassoux is following a venerable philosophic tradition. David Hume, in 1748, argued that everything we know, we know from experience rather than thought (he was on the side of the Empiricists versus the Rationalists). Hume pointed out that before one billiard ball hits another, we have no way of knowing, on the face of it, what will happen next: ‘May not both these balls remain at absolute rest? May not the first ball return in a straight line, or leap off from the second in any line or direction?’² We believe that the second ball will zip away in proportion to the force we gave the first, precisely at the angle desired, smacking into the centre of the pocket (yes!) because of our previous experience of what happens when one thing hits another. Hume says that even though we’ve experienced a cause lead to an effect before, it is logically possible that the same cause could have a different effect. Meillassoux says that it is absolutely possible that the same cause could have a different effect.

It’s a refreshingly audacious philosophic move, entailing that even what we consider the laws of the universe could change at any moment. For me, it’s then a little disappointing that Meillassoux’s argument trails off into an endorsement of the laws of the universe we actually have, building his argument on mathematics rather than philosophy. Nevertheless, that his first book should so comprehensively (according to him anyway³) dismiss metaphysics and religion in favour of mathematics, science and atheism, lends further piquancy to the eccentric direction his second book takes.

In The Number and the Siren Meillassoux describes how he stumbled by chance upon an apparent encrypted number in Mallarmé’s Coup de dés. Inspired by enigmatic notes that Mallarmé made throughout much of his life – and asked to be burned, a single volume remains – he envisages a religious scope to the poem and its hidden number. Mallarmé’s fragmentary notes are toward The Book, a projected work, unfinished, barely even started, its pages to be unbound and so interchangable, allowing a huge range of possible The Books. The Book was to be read on ceremonial occasions, at prescribed times and locations. This unlikely enterprise was intended to replace ceremonies of worship devoted to monarchies and religions with a secular ceremony worshipping the divine in the human.

Because The Book was never finished, Meillassoux believes its aim was transferred to Mallarmé’s late, great work Coup de dés. The coded number (not telling) will reveal the divine, the absolute, in us. The main character of the poem, The Master, stands for a moment above the shipwreck of traditional certainties, hesitating to throw the dice of a new dispensation: does he in the end throw them, and if he does, what number is produced? We don’t know. And Meillassoux says that similarly the author of the poem may have chosen to encode a number in the poem and that he may have found it – and yet he can’t be sure and this undecidability leaves open all options, makes the author contain them all and so become the divine Chance that is our fundamental nature. Mallarmé is a secular Christ and Meillassoux’s decipherment of his poem is the secular Mass.

All very high-flown you may be thinking. Well, yes. But brace yourself, there’s more. Having argued for an atheistic, materialist philosophy, Meillassoux elsewhere in his work considers justice. For atheists, there is no redemption for history’s victims, while for theists there remains the question of why God allows evil. He gets around the problems of these positions by advocating for hope. In a world of radical contingency, where Chance holds sway and anything could happen, he suggests ‘believing in God because he does not exist.’⁴ We are to look forward to the real possibility that God will burst into existence to resurrect and redeem the dead.

I was surprised to see this God of the future appear in Meillassoux, both in the form of the Christ-like Mallarmé-Messiah and as the not-yet-God to be believed in anyway – but not surprised by the concept itself. God-to-come appears also in the millenarian idea of the Singularity: the point at which artificial intelligence reaches so far beyond our own that its technology takes us out of our human flesh and into immortal robot or virtual bodies. Ray Kurzweil, its major prophet, believes that God-like beings will exist in the future, capable of resurrecting the dead (with science, of course, so plausible…). Those who look forward to the transcendence of the human body through technology, have a transhumanist church which similarly anticipates that: ‘We will go to the stars and find Gods, build Gods, become Gods, and resurrect the dead from the past with advanced science, space-time engineering and “time magic.”’

In these ideas is perhaps the early stirring of a more fundamental change. There is a body of academic research supporting the theory that ancient and modern people experienced time in different ways. For ancient people time was cyclical, like the seasons, and if events looked different, their meanings were repeated. The same basic patterns of things occurred over and over. Modern people experience time as linear, as always progressing to a new state of things. The model for this is often supposed to be the messianic Judaeo-Christian religions. In these, an endpoint to worldly life is anticipated: the coming of the Messiah and the Day of Judgement. If you consider yourself to be unaffected by such beliefs, let me put it this way: the idea that human life is progressively getting better as time goes by, that we are advancing politically and economically towards a just world, is precisely what ancient peoples could not conceive.

Many recent movements have traded in belief in the advance toward human perfectibility, though untethered to divine inspiration. Early evolutionary science (the contemporary brand is more circumspect), Marxism, Fascism and liberal democracy all rest, or rested, on the shaky conceptual ground of unacknowledged millenarianism. With Meillassoux and the Singularitarians, messianic beliefs are similarly stripped of their origins in God, but their messianism is celebrated rather than hidden. We have not had a Fall, and are not returning to our creator. No, the world began for no reason, it is arbitrary and meaningless – but it will be redeemed by a future miracle.

What is it that this God reflects about our contemporary situation and beliefs? If we can be redeemed only by chance in the future, it follows that we must believe our present selves to be lost. The much criticised view that we are all tainted by Original Sin at least places us in a narrative: we Fell from grace and are in the messianic historical process of redemption. That is surely better than the idea that we are all ciphers, that meaning, that justice, have never existed for us and all we have is to hang on in the hope that it miraculously appears.

The implication is that we view ourselves according to our posterity. Once we would have founded our identities on our heritage. Who were our fathers (sadly, our mothers were not usually such a concern), what were we bequeathed? Now our identity is a question of who will look back on our memory. Who in the future will validate our present?

And for those who feel all this discussion seems far from everyday life, I ask you to consider why we take our selfies; why exciting and unusual events are haloed by hand-waved smartphones, seen and curated through a screen as an anticipated memory; why do we prostrate ourselves before TV judges, not trusting our talent until we have seen it played back to us?

Social media, as its logical conclusion, promises a Resurrection that is already being offered by the sick-makingly named Eternime, a website that collates your social media profiles so that ‘you [can] live on forever as a digital avatar … even total strangers from a distant future will remember you in a hundred years.’

Taken seriously, this messianism without a spiritual or moral framework, without any structure at all, is desperate: until the saviour arrives we have only anxiety. Nothing of the good or the beautiful, nor even the bad and the ugly, is yet real. The transhumanist God of the future might at first seem more optimistic, as it asks us to participate in constructing the deity. But this is a laissez-faire spirituality, which requires no ethical transcendence, no effort to be good to one another; only technical facility.

Another, bleaker version of this retrospective creator is the hypothesis that we and our world are a computer simulation of the ancestors of a post-Singularity civilisation. In this case we are our virtual past, the messiah has come, the promised land is attained, yet we will never know, will always wait, any meaning we might have out of our reach and oriented entirely toward our ‘descendants’.

Perhaps this is the messianism of the postmodern, of consumer culture, of things reduced to the abstract numbers of scientific measurement or monetary worth, and so become indifferently interchangeable: we are empty, indolent addicts waiting for the next hit, hoping desperately for meaning to finally be bestowed by our next possession.

³ If you’re interested, he gets a pretty thorough going over in this article: https://www.academia.edu/23860683/_Correlationism_The_Dogma_that_Never_Was

One thought on “The Poetry of Chance: Mallarmé and Meillassoux”