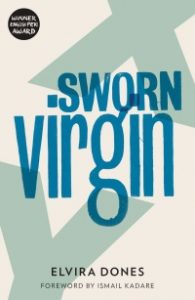 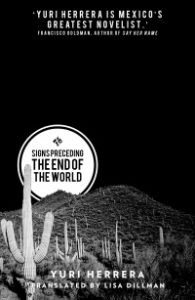 Signs Preceding the End of the World

By chance, a couple of recent reads have reached me by way of And Other Stories, a publishing house set up in 2010 and about which there appears to be everything to like. First off, it’s a not-for-profit (specifically, for voluntary and community sector nerds like me, a Community Interest Company, so with an asset lock and everything). Then, it generates investment by subscription: members are sent a selection of books each year, chosen with an eye for contemporary, literary work – often in translation – that eye-on-the-bottom-line publishers are less likely to take a punt on.

I picked up Signs Preceding the End of the World in Wood Green’s Big Green Bookshop, whereas Sworn Virgin was a below basement bargain in a 50p-a-bag job lot from Altrincham Library’s sell off of surplus stock.

Both novels work with identity and the transgression of boundaries, and the more curious conceit is that of Sworn Virgin. Mark Doda crosses the border of the United States of America (as does Makina, Herrera’s heroine) on a passport that confirms a new identity. The Albanian state issued identification takes no account of his oath according to the Kanun of Lekë Dukagjini to live as a man, noting her birth gender and naming her Hana.

In the isolated villages of mountainous northern Albania state control has always been weak and tribal law has survived Ottoman and Communist empires. Under its provisions, only men can inherit property and wealth, and only men can work outside the home. For families with no young men – perhaps due to the generational blood feuds sanctioned by the Kanun – a woman could be nominated a man so that the masculine functions could be performed. Just so long as she renounced a particular feminine function. Though the influence of the Kanun is dwindling, there are sworn virgins in the mountains to this day.

Hana, taken in as a child by her aunt and uncle, is about to be orphaned for a second time when she decides to become Mark. Her aunt has had a heart attack and her uncle is dying of cancer. They have no children of their own and her Uncle Gjergj arranges a marriage so that she will be provided for when he’s gone. But Hana has had a taste of other possible lives, studying world literature in the capital Tirana – and moreover is a rebel. Unwilling to be wed to a man she barely knows, to cook and clean and wash his feet, as is traditional, she chooses to become a burrnesha – a ‘he/she’.

To the curiosity of a friend from her student days, ten years later, Hana says, ‘There’s nothing to tell … You can’t talk about your own death.’ And the book appears to bear this out: we know Hana as she crosses the thresholds in and out of Mark, but are told very little of Mark himself. There is some sense to this, given that Hana resents the whole experience and simply represses her emotions during it. However, it means that despite tantalising glimpses of a gender performance only tangentially related to sexuality, her journey from Albania to the USA leaves us with a sexy-librarian-esque tale of an emotionally unavailable woman discovering her sexuality.

It’s worth noting that the sexy-librarian trope derives from the circumstance that working women have often been considered, by their move beyond the domestic, to be making themselves sexually available, and therefore have been both desired and disapproved. As women began entering the professions in the nineteenth and twentieth centuries, and particularly in the middle and upper class dominated environment of the library, they dressed with rigorous respectability, so as to avoid undue emphasis of their sex. But avoidance is only the negative of emphasis, enticing in its own way, and so the bun-unpinning, glasses-removing stereotype was born.

Dressing sensibly didn’t always help women librarians of the time either (quelle surprise), many of whom had to fend off the attentions of Melvil Dewey, he of the Decimal System, who, in his own words, was keen to ‘frankly show and speak of [his] liking for women.’ The same bigotry obtained in nineteenth century academia and the mediaeval Balkans: either a woman is the property of a man, or she is available to all men. It manifests as another trigger for Hana’s escape from and into masculinity when she has to fend off an attempted sexual assault, excused (in all too familiar words) because ‘women don’t go out on their own unless they’re up for it.’

Hana’s story couldn’t be told without expressing the stifling nature of a patriarchal tradition that values the life of a woman at half that of a man: twelve oxen. And it is expressed directly by Hana herself, in her rejection of it. She is someone who doesn’t accept her lot, and there are such people, but I would have loved a more subtle treatment. It would be fascinating to discover more of how women in such a unique position internalise their patriarchal culture. The fundamental value of the Kanun is honour, which makes the oath burrneshas take – they are sworn virgins – something I would have liked Hana to be more conflicted by.

One real life burrnesha favours the society of men, complaining that ‘women are envious and weak, endlessly gossiping‘. When she was twenty, her father murdered and brothers imprisoned or killed by the communist government, Pashe Keqi swore to live as a man. He proudly states: ‘no one would dare swear at me because I could beat them up … I don’t know how to do women’s talk. I am never scared.’ His father’s killer was punished by the state, only released from prison at the age of eighty. But as the head of his family, Keqi felt he had to see the Kanun honoured too: a life for a life. His fifteen year old nephew, on his orders, shot the man.

Signs Preceding the End of the World

‘I’m dead,’ says Makina at the very beginning. For both these authors, the metamorphosis from one identity to another is a matter of life and death. Herrera’s story is a journey over a border very like the one between Mexico and the USA. But, never-named, his fictional border broadens to include others, including that between this life and the next. Makina is embarked on a katabasis, a journey to the underworld.

For the indigenous Mexica, the dead had to travel through nine underworlds, facing a challenge in each one, before arriving at Mictlan, a place of recreation. The nine chapters of this novel are named after the Mexica underworlds: ‘The Place Where Flags Wave’, ‘The Place Where People’s Hearts are Eaten’, ‘The Obsidian Place with no Windows or Holes for the Smoke’, and so on. This makes Mexico the safe and known home; the USA the exotic and undiscovered country from which no one returns.

It’s a welcome reversal of the dominant (because US cultural production dominates) narrative that the USA is normal, the rest of the world primitive ancestors of it. Though Hana also crosses the border into the USA as a foreigner, she emerges from a culture she chafed against, though it was her own, to one where she finds herself and which feels familiar to us. Makina descends through dangers to a place where ‘everything’s so stiff … it’s all numbered and people look you in the eye but they don’t say anything when they do.’

Makina, like Hana, takes on the active, heroic, traditionally male role in the absence of actual men to do so. She, too, repels sexual assault with violence. Her brother, like Hana, is forced to impersonate another’s identity to be accepted as deserving respect. The perspective of women, immigrants, transgressives, those who don’t fit a society’s view of itself, is one from where we can see what’s broken.

Denied an identity as real as those with power, these in-between people are unfixed, flexible, able to put themselves aside. The real ones identify with the instruments of their power, and fall with them. In the depths of the underworld, in the final challenge before her soul’s migration, Makina receives false identity documents allowing her to remain in her new country. With a new name, her old self falls silent; not reincarnated, but recreated. She tells herself, bearer of a message that isn’t hers over a prohibited border: ‘You are the door, not the one who walks through it.’