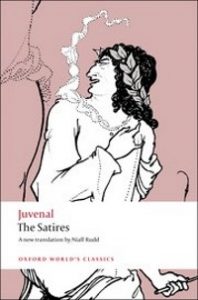 Satire is a genre we inherit from the Romans. From the phrase lanx satura – an offering of mixed produce at harvest festivals – it was first used with reference to the motley metres of poetry collections by Ennius (239-169 BC). It’s current meaning was fixed by Lucilius (180-102 BC), and though his work only survives in fragments, Juvenal (c. 60-130) assures us that ‘when he roars in wrath, the listener flushes; his mind is affrighted with a sense of sin, and his conscience sweats with secret guilt.’

Juvenalian satire became its own sub-genre, recognised as a return to the scathing roar of Lucilius after Horace‘s more humorous and gentle admonishments. The venom of Juvenal’s contempt is evident – for instance in stating that the Punishment of the Sack was not severe enough for the hated emperor Nero. The Poena Cullei involved being sewn into the aforementioned receptacle with a dog, a snake, a monkey and a cockerel for company. And then thrown into the sea.

But Nero was long dead and his legacy generally reviled. For all his biting scorn, Juvenal was less courageous, or perhaps more sensible, than Lucilius. His predecessor was regarded with some awe for calling out the targets of his attacks by name. But insult the wrong person and ‘soon you will blaze as a living torch … smoking and burning, pinned by the throat, driving a vivid pathway of light across the arena.’ So Juvenal’s commentary on his contemporaries is indirect – or directed at those without influence.

Classical satire, including Juvenal’s, retained the original sense of a miscellany by shifting it’s withering scorn from one target to the next – the city, gluttony, corruption – in the manner of a grandfather, after an evening tipple, getting on the ‘and-another-thing!’ high horse about the modern world.

And Juvenal was not a fan of the (relatively) modern world. His city, Rome, is noisy, dirty, people everywhere. At night young men ‘heated with wine’ pick fights ‘(if fight it is, where you do the punching and I just take it)’ and even in your own home you fear robbery. The urbanite has ‘to live in fear of continual fires, collapsing houses, the countless threats of a savage city, not to mention poets reading their work …’

What could be more familiar than this? The invoking of all misfortunes as dangers that could befall YOU at any moment. How brave of you to go out at all! To list the sufferings of the place where you live, the things you have to put up with, is also to say that you are a hardy survivor of them. And having here entered the mode of satire myself, I can confirm the perverse pleasure to be found in a good moan.

But the exaggerated sense of victimhood has its familiar dark side too. Juvenal is disgusted that Rome has become ‘a city of Greeks’. Greeks, like foreigners everywhere, are two-faced and sexually predatory: ‘nothing is safe from [a Greek’s] organ,’ neither ‘the virgin daughter, nor even her still unbearded fiancé.’ He’ll even ‘debauch his patron’s grandma.’

Roman bigots were as keen to police gender roles as are contemporary homophobes. But they didn’t mind homosexuality as such – as long as a man was a man, his partner was not such a concern. What got them clutching their pearls was the notion of a patriarch on the receiving end, lying down and taking it like a girl. Virility and honour weren’t diminished if a mature citizen penetrated a young man or a slave – bodies designated inferior, as women’s were.

Effeminacy, ‘inverting the normal custom’, was the problem, and Juvenal decries men who wear women’s clothes, perfume, make up, or who wed in informal ceremonies. ‘Such things, before we’re very much older, will be done in public – in public, and will want to appear in the papers!’ As it turned out, we were very much older when it became possible to celebrate same-sex marriages, and even now Juvenal’s views would have a ready audience.

Having voiced his displeasure at men behaving like women, Juvenal devoted a long section to another group who offend by behaving like women: women. The frivolousness of the female is condemned in recognisable terms: adultery (‘old and hallowed by time is the custom of rattling your neighbour’s bed’), cosmetic routines (‘that which is dressed with lumps of baked and moistened dough – what shall we call it? A face, or an ulcer?’), gossip (‘She will tell you who made the widow pregnant, and in which month’) and astrology (‘if there’s an itch in the corner of her eye … she studies her horoscope before sending for ointment’).

Despite all this curmudgeonly conservatism, there are glimpses of more liberal attitudes. In this chapter on women, a wife caught in flagrante delicto defends herself:

‘Long ago we agreed,’ she says, that you could do as you liked, and that I should be able to please myself. You can rant and rave till the sky falls; I am a person!’

While Juvenal gives this strikingly modern argument as an example of ‘women’s effrontery’, we learn from him that such arrangements were not uncommon in Roman society.

Elsewhere, a cruel woman (a stereotype that has fallen out of fashion) orders the arbitrary crucifixion of a slave. Juvenal has someone intervene: ‘give him a hearing.’ The reply comes, ‘You fool! Is a slave human? What if he hasn’t done wrong?’ The woman doesn’t want her sadism thwarted by any notion of fairness, and, even though slaves were not legal persons, the Roman reader is clearly meant to feel the injustice – if not of slavery, then at least of the mistreatment of slaves.

Snobbery too gets short shrift. Those of low birth who have become famous as lawyers, soldiers, and even royalty, are praised for their achievements in contrast to those who have done nothing, but take pride in halls full of portraits and statues of their illustrious ancestors: ‘Your head is swollen by belonging to Drusus‘ line, as if you had done anything to make yourself noble’ (though Juvenal does also at times mock the nouveau riche, usually sons of freedmen, i.e. descendants of slaves).

In his later writing, Juvenal became less of an attack-dog and as well as caricaturing immoral behaviour, promoted a virtuous life with a strong flavour of Stoicism. A homily on parenting warns that our conduct is a model for our children, who are quick learners and will surpass us in our vice. ‘A child deserves the utmost respect’ and should be taught, rather than cruelty, ‘that the body and soul of the slave are made of the same material as ours’.

It is in the first of the later, relatively gentler pieces that is found the cutting line of his that we all know: ‘bread and circuses’. This was a complaint about the Roman people who in the time of the Roman Republic, 509 – 27BC, did without kings and elected their leaders. During a period of civil war, the Ceasars, first Julius and then Augustus, seized power for themselves, and Juvenal saw the populace as complicit in their own subservience, content with tyrants as long as the grain dole (a subsidised or free ration for poorer citizens) and entertainments at the circuses were maintained. 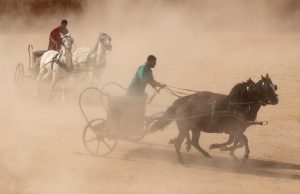 In fact, Niall Rudd translates the phrase as ‘bread and races’, because the main event at the circus was the chariot race. People supported charioteers like football teams. From the Circus Maximus, which could hold 150,000 spectators, ‘The shouting swells to a deafening roar. I assume the Greens have won; for, if they had lost, then you would see this city of ours stunned and stricken’. The Lizard, a driver for the Reds, is paid as much as a hundred lawyers.

This resonance is typical. Though Roman lives were often more precarious and brutal than ours, it is no great stretch to recognise their pastimes, prejudices, vanities and virtues through our own. One of the most instructive things about reading ancient literature is that plus ça change, plus c’est la même chose: the more things change, the more they stay the same.