The Book of Legendary Lands 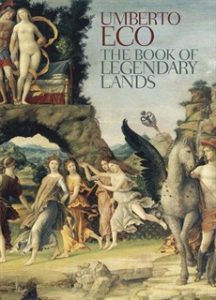 Before setting out on the adventures that would make him famous, Alonso Quixano spent eight days dreaming up a new name worthy of his new life. He settled on Sir Thighpiece, or, to give him his full title in his own language, Don Quixote de la Mancha.

The hitherto meek gentleman dubbed his mighty steed Rocinante, and, needing a damsel to whom he could dedicate his victories, rechristened a peasant girl he had once loved Dulcinea del Toboso; ‘a name that, in his opinion, was musical and magical and meaningful, like all the other names he’d bestowed upon himself and his possessions.’ With that, the Knight of the Rueful Countenance, packing a headful of chivalric tales, set off. In his mania for pulp Romance stories he overlayed the world around him with the magical and meaningful: inns became castles and windmills were ‘giants with arms almost six miles long.’

In confusing the fictions of Romance with the real world the man of La Mancha was mad. Don Quixote is frequently cited as the first modern novel and, though the ‘first’ of anything is a slippery concept, it is certainly a crucial stage in the supplanting of Legend by Realism.

But, of course, legend didn’t simply disappear. That great, late Romantic (a term related to but differing from Romance) Proust loved the romance of names too. The Quixotic protagonist of In Search of Lost Time, Marcel, dreamed of the 1.22 train from Paris, Saint-Lazare, ‘whose hour of departure I could never read without a palpitating heart’ for the way it ‘progressed magnificently overloaded with proffered names’ of towns on its timetable, to each of which he had attached an imagined essence. None more so than Balbec, which, after a couple of passing comments on the coastline of its country and its mediaeval church, he conceives as:

‘an old piece of Norman pottery that still keeps the colour of the earth from which it was fashioned, [and on which] one sees depicted still the representation of some long-abolished custom, of some feudal right, of the former status of some locality, of an obsolete way of pronouncing the language which had shaped and wedded its incongruous syllables and which I never doubted that I should find spoken there even by the inn-keeper who would serve me coffee on arrival, taking me down to watch the turbulent sea in front of the church, and to whom I would ascribe the disputatious, solemn and mediaeval aspect of some character in an old romance.’

As an adolescent, he finally made the journey, only to find his hopes dashed. The church of Balbec, imagined nobly poised above rocks lashed by the ancient ocean, is twelve miles inland, and its famous statue, the Virgin of the Porch, ‘the immortal work of art so long desired,’ was ‘transformed … into a little old woman in stone whose height I could measure and whose wrinkles I could count.’

Don Quixote is oblivious, in his insanity, to the incongruity between his beliefs and reality. It is those he meets – and the reader – who are aware of the mismatch, and so his adventure is comic. Marcel, on the other hand, is constantly yearning for some transcendent aesthetic experience, or sublime love, and constantly disappointed by what reality offers him, and so his adventure is tragic.

In Eco’s book, legendary lands are those ‘that, now or in the past, have created chimeras, utopias and illusions because a lot of people thought they really existed or had existed somewhere.’ Are, then, ridicule and disappointment the only responses available for such ‘places’?

Cervantes never named the place from which Don Quixote sallied forth, ‘so that all the towns and villages of La Mancha could fight among themselves for the right to adopt him and make him their own son, just as the seven cities of Greece contended for Homer.’ That is, until, after two years work by ten Spanish professors, it was declared that Don Quixote was really from Villanueva de los Infantes. Proust modeled some aspects of the fictional town of Combray, in which his own novel opens, on Illiers, where he spent childhood holidays. In 1971, the real town changed its name to Illiers-Combray. Neither of these places fit Eco’s criterion for Legendary Lands exactly – people don’t believe that these fictional places really existed. And yet the searching and the naming of the real after the fictional is undertaken because we want something of the one to bleed into the other.

So there are still those who dream of finding their Holy Grail – in some cases, literally. Eco is scathing about The Da Vinci Code, a worldwide bestseller and work of fiction, which has a plot hinging on Jesus Christ escaping crucifixion and running away to France with Mary Magdalen. Their children became the Merovingian dynasty and what was called in Old French romances the san graal, or Holy Grail, is really sang real, or Royal Blood, a fact covered up by the secretive Priory of Sion. Fair enough – only the author, Dan Brown, claimed that ‘ninety-nine per cent of it is true.’

The Priory of Sion was registered as an official organisation in 1956 by Pierre Plantard, who claimed it was getting on for two thousand years old. Founder of an anti-semitic organisation that collaborated with the fascist Vichy regime (though he later claimed it was part of the resistance) and imprisoned for breach of trust, he doesn’t appear the most reliable of characters. Despite that, he and a series of dubious/credulous chancers built up a store of legend centred on the village of Rennes-le-Château that many found compelling. Henry Lincoln, Richard Leigh and Michael Baigent tied together various strands of this speculation in The Holy Blood and the Holy Grail and their ‘historical’ research seems to have provided the basis for The Da Vinci Code.

Leigh and Baigent certainly thought as much, and they sued Dan Brown for plagiarism. In doing so, they gave a hint that their own work might be more confection than history – one cannot plagiarise the historical record. Unsurprisingly, this comic court case of authors tragically tilting at their own windmills did not succeed. But none of that stops the steady stream of wide-eyed tourists and treasure hunters to Rennes-le-Château.

A prime example of the problem of names is the island of Taprobane. Referred to by Strabo, Pliny, Ptolemy and other ancient authors, Taprobane was an island of Oriental mystery and fabulous wealth. As with other far away places, it accumulated legendary attributes in European culture: it had two summers and two winters, it was the long sought site of the Garden of Eden, it had ‘mountains of gold guarded by giant ants.’ When mediaeval travellers went east they faced two problems in locating the island: firstly, they were unable to find a real place exhibiting the fantastic traits Europeans had imagined; secondly, a large, rich, exotic island that might just have been a candidate for Taprobane was already known to them: Ceylon (now Sri Lanka). Due to a simple duplication of names, ‘from an island in excess, Taprobane slowly became an island that did not exist.’

Travellers of the Middle Ages had similar hopes of discovering unicorns, which ancient sources gave them every reason to believe were out there somewhere. And, indeed, a number of them reported having seen unicorns, including Marco Polo. He was, though, a little disappointed that the unicorn has ‘hair like a buffalo and feet like those of an elephant … it is a most foul beast to see. It is not, as they say here, that it lets itself be taken by the maiden, but the opposite.’ In short, it is rather like a rhinoceros.

The consistent failure of reality to match our hopes generates new legendary lands. Once Europe dreamed of finding Eden and the Kingdom of Prester John in the East, El Dorado in the West, Ultima Thule and Hyperborea in the North and Terra Australis in the South. As the world’s continents were reached and mapped, so such hopes retreated to the unexplored poles, from which the interior of the hollow earth and the realm of Agartha could be reached, then to the canals of Mars.

The perpetual migration of legendary lands tells us that what is being looked for is not geographic. The legendary journey moves instead across the difficult terrain of the mind. Just as the alchemists wished to transmute their souls to gold by the manipulation of metals, so many explorers have set sail in search of something to be found only in themselves. The quest for a specific location of salvation or utopia endlessly defers its discovery. It might be that this is simple error. But it may also be a strategy.

The unmapped spaces available for dreaming have hugely diminished. Today, more than martians, the legendary is likely to be about what doesn’t happen in space. Exhibit A: the moon landings were a hoax. Tales of aliens persist, but attached to conspiracy theories explaining why they are hidden from us by The Government. Legends of the past – Atlantis for instance – survive because there is no way for them to clash with reality. Belief in a Flat Earth, more or less a fringe concern ever since ancient times, is, minimally, resurgent and risks no Proustian tragedy, no discovery of the disappointing actual, as it is merely a matter of renaming what is already there. On the other hand, the Cervantean comedy of such mad as La Mancha behaviour is assured.1

Placing our belief in something real but out of our reach – over the sea, under the earth, hidden from us by a sinister cabal – is to be, like conspiracy theorists and Don Quixote, impervious to disillusion. When the tilt at windmills ended in his being knocked on his arse by a spinning sail, he decided that an evil enchanter had ‘turned these giants into windmills, to deprive me of the glory of my victory.’ Considering, on the other hand, that our beliefs are all fantasies destined to be traduced by contact with reality, like Marcel, is simply a more cynical method of choosing not to allow a productive engagement of self and world. Marcel, a fictional version of Proust and used by him to express many of his own beliefs, thinks that ‘man is a creature that cannot emerge from himself, that knows his fellows only in himself.’

Thankfully, we are not bound to ignore reality, like Don Quixote, nor to consider it hopelessly out of reach, like Marcel. These are indeed strategies to avoid the long and difficult work involved in naming the world: not only testing our subjective beliefs against objective phenomena, but the painstaking adjustments of both that follow. Don Quixote, Marcel, and others (which is to say, all of us, more or less) who want to conjure an ideal world simply by imagining its names, frequently put off the effort of making their here and now better.

But perhaps a more playful approach is called for. After all, we only reach the real by imagining what it might be and finding out if it is or isn’t. Cervantes, at the close of his masterpiece, reveals that his ‘only desire has been to make men hate those false, absurd histories in books of chivalry’ – and, we might add, of legendary lands – ‘which thanks to the exploits of my Don Quixote are even now tottering, and without any doubt will soon tumble to the ground.’ The obvious irony tips us off that he enjoys a false, absurd history, such as that of his Don Quixote, as much as the next person, and expects them to be told for a good while yet. Long live legends, only, best to not take them too seriously.

1 Eco notes a one-up on Flat Earth theory: the Concave Earth Theory, in which the earth is the inside of a sphere.