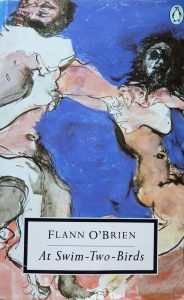 To do justice to a book which itself has no truck with antiquated approaches to the telling of tales, such as singular openings – or, indeed, conclusions – a singular article would be insufficient. And so I embark upon a three-pronged thesis.

The first: If you loved William Tracey’s rollicking wild west-of-Dublin adventures, like Red Flanagan’s Last Throw, then you’ll love this gripping, must-read drama of cut-throat Irish ranch-hands. Mr Paul Shanahan is a veteran cow-puncher who finds himself struggling to reconcile his self-respect with the rustling of his herd by the dirty swine Red Kiersay. O’Brien’s writing, so fresh and true and funny and heartbreaking, throbs with wit and wisdom, and his award–winning book made me ache to return to it. This incisive and important novel felt just as relevant in 1941 as when it was first published. It stayed with me long after I’d finished reading: I couldn’t put it down. Four stars out of five.

The second review: Falling somewhat in the shadow of his contemporaries, Joyce and Beckett, O’Brien’s seminal text, At Swim-Two-Birds, nevertheless holds its own in dialogue with the bodies of work of the two great Masters of Irish Iconoclasm. It has been said – I think plausibly – that with this boon to narratological studies postmodernism was inaugurated before its time. The meta-fictional structure persistently violates conventional narrative ontology and brings into intertextual colloquy texts framed by multiple ideologies. A postcolonial approach ensures that a veritable palimpsest of literatures from Eire’s rich history is presented – but though registers from high to low are juxtaposed, no one discourse is privileged. Nested hypodiegetic levels question authorial authority, prefiguring Barthes’ notion of the ‘death of the Author’.

The third review: The bards sing praise to Flann O’Brien also by the honorifics Brother Barnabus, Brian O’Nolan, Brian Ó Nualláin, Myles na Gopaleen, and George Knowall. Melodious is his voice: more melodious than the lamenting of a wounded otter in a black hole. Bestriding the bard-fought tourneys of Lit. Crit. he was not all mouth – though the blarney in it spurted forth to the volume of the surf-roar at Tralee, or of the pitter-patter of porter pints repeating on him in discreet corners of Dublin hostelries: no; mouth not all, but in addition trousers commodious enough to house the leaden discharge of twenty lesser poets’ pencils. His knowledge of physics was moderate.

However, it is no mean feat to take in hand this well-told tale without twisting and trampling and torturing it for the weaving of this blogger’s web-review. I proceed with inward reservation.

Nature of inward reservation: not wanting to make a balls of it while I’m at it.

Who could have pioneered the field of aestho-psycho-eugenics, begetting a quasi-illusory offspring borne into the world at twenty-five with tobacco stained teeth and yet no smoking habit to account for it? Who could think to adorn a contest of evil and good angels with a dialectic upon the key criteria in determining the kangaroolity of women? Who but a story-teller. Who but the God-big Flann.

That is all my bum, said The Third Reviewer, the voice ominous in its internal independence.

Aestho-psycho-eugenics is a piece of pseudo-scientific flim-flann, yet the performance of its utterance introduces an aporia into the dominant discourse, creating space for diverse and diasporic interlocutors.

That is all my bum, said The Third Reviewer, in an interjection both unnecessary and sobering as to consideration of my mental health. Who’s writing this article anyway?

You will be rooting for the hero, Dermot Trellis, a suffering artist of the most romantic sort. After losing everything, his brave journey back to health and wealth will warm your heart. I was completely hooked. Six stars out of twelve.

That is all my bum, said The Third Reviewer, whom I can ignore no longer.
From where are you speaking?
From a cluster of neurons in the temporal lobe of your left brain hemisphere.
I appreciate the contribution you have made so far, but now you really must allow me to tie these reviews tog-

The blogger abandoned his usual painstaking approach, choosing instead to cede expressive function to his unconscious mind via the practice of automatic writing. Invert my kangaroo to have my glasses smashed. His bottom is the stern of a sea-blue schooner. Daybreak. Helmsman struck blind by lightning.

At least tell me-

On each little point, littler points are there on every pointed point.

-what you thought of the book, said the blogger.
A finely modulated illusion of reality, my arse.