The Invisible Child and The Fir Tree: 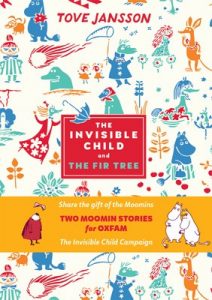 As everyone knows, the Moomin is a hibernatory creature. This accounts for the fact that the Moomin family are neither aficionados, connoisseurs, nor even passing acquaintances, of Christmas.

Hence, when they are prematurely woken from their wintry slumbers by the Hemulen, they are most disconcerted by the foreboding news that Christmas is coming. Sleepy-headed and amid the rush of their neighbours’ festive preparations it seems as though ‘something awful is happening.’

The Hemulen’s Aunt tells them: ‘Better get yourself a fir tree before dark.’ But to the innocent Moomins this only means that: ‘The danger comes by dark’. Aghast at how much food must be prepared for the Christmas that is coming, they ask each other: ‘Do you think Christmas is very hungry?’ Fortunately, the other woodland creatures between them give the Moomins the help they need and the whole thing works out well for everyone.

Jansson was a writer of ludicrous delicacy and a master of detail. Quite apart from Christmas, the last thing the Moomin family does before getting back to their season long sleep is to lay out the mittens the Hemulen misplaced right back at the beginning, in a spot where he can’t miss them.

This book collects two Moomin stories to raise money for Oxfam’s Invisible Child campaign to help women and girls. So far sales have helped to support women survivors of sexual violence in Iraq, women farmers in Rwanda, and women’s rights activists in Bolivia, Lebanon and South Africa. It’s an appropriate cause for a writer who wanted everyone to feel safe in an extended Moomin, or even human, family. 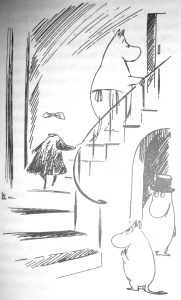 One day, Too-Ticky asks the Moomin family to look after a little girl. ‘You all know, don’t you, that if people are frightened very often, they sometimes become invisible.’ Little My knows that if it’s fright that’s made you invisible, it isn’t other people being kind to you that will make you be seen again. She asks the invisible girl (who is terribly mousy) ‘Haven’t you any life in you? D’you want a biff on the nose?’ And she asks because ‘You’ll never have a face of your own until you’ve learnt to fight.’

Recommending MMA training may not seem the obvious central message for a campaign to raise the profile of the struggle for gender equality (although, I suppose, why not?). But Jansson recognises that fights, like the much misunderstood Jihad, need not only be about biffs on the nose.

When the invisible girl finally releases her anger and stands up for something that’s important to her: there she is! ‘…the silliest, nastiest, badly brought-uppest child I’ve ever seen, with or without a head’, as Moominpapa, the poor object of her wrath, puts it.

The development of the story reminds me – as if proof of Jansson’s psychological acuity were needed – of a lecture by Donald Winnicott: Delinquency as a Sign of Hope.

Speaking to the Borstal Assistant Governors’ Conference, the psychoanalyst told of:

‘A child who has … suffered unthinkable anxiety and then has gradually reorganised into someone who is in a fairly neutral state, complying because there is nothing else that the child is strong enough to do. This state may be fairly satisfactory from the point of view of those who are in charge.’

This child is obedient but passive, nothing of their real self is there, nothing of their own motives, thoughts, agency. Our desires inevitably have a destructive aspect – think of all the poor plants and animals you’ve gnashed into paste in order to further your sorry life (though sometimes what’s destroyed may only be ‘the rules’). The child who didn’t find their destruction accepted, or contained, and was therefore deprived of a desire, becomes afraid of it.

‘Then, for some reason or other, hope begins to appear, and this means that the child, without being conscious of what is going on, begins to have the urge to get back behind the moment of deprivation and so to undo the fear of the unthinkable anxiety or confusion that resulted before the neutral state became organised. … Whenever conditions give a child a certain degree of new hope, then the antisocial tendency becomes a clinical feature and the child becomes difficult.’

Tracing rule-breaking back to its origins, Winnicott points to occasions when: ‘Your own child claims the right to go into the larder and take a bun, or your child of two years explores your wife’s handbag and takes out a penny.’ If these natural explorations and assertions of autonomy are crushed, the grown child may only be able to express their desires compulsively.

‘Naturally, the fountain pen stolen from Woolworths [you’ve dated yourself there Donald] is not satisfactory: it is not the object that was being sought, and in any case the child is looking for the capacity to find [for themselves], not for an object.’

Of course, the Moomin family would never abandon anyone they’d taken in (even if Moominpapa is quite annoyed), so they would agree with Too-Ticky’s assessment when she comes back to see how the invisible girl has got on:

‘You seem to have changed her; she’s even worse than Little My. But the main thing is that one can see her’. 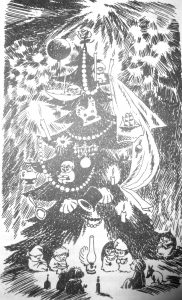