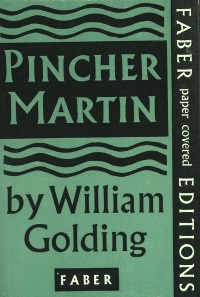 William Golding is known to most only as the author of The Lord of the Flies. Partly because the title has become shorthand to refer to any breakdown of civility; partly because of its place on the school curriculum.

But Nobel prizes for literature are not won off the back of a single book, no matter how good, and Golding wrote many excellent novels, including this deceptively simple story of a man washed up on a rock in the middle of the sea.

Some have identified Martin’s rock with Rockall, a chunk of granite poking uselessly (unless you’re a bird or some form of mollusc) out of the Atlantic. To take up the earnest quest to identify the reality of fiction is, of course, to search for a legendary land: whether or not Golding had Rockall in mind makes little difference to the story.

Except in so far as he might have been making sly allusion to a pun. Flanders and Swann sang a song rhyming Rockall (implicitly) with a rude phrase meaning ‘nothing’. And nothing is central to the plot of Pincher Martin. The anti-hero, after days spent with nothing but the rock, sea and sky for company, perhaps begins to go mad, wondering if his world is not only ‘nothing but’, but nothing at all.

For the first fifty pages all that happens is that the man is in the sea, is swept against the rock, climbs onto the rock. Virtually all that is described is the limited environment of turbulent water, the barnacled crag and the physical pain, hardship and effort of the struggling body. Golding’s sheer authorial ability shapes a compelling, often poetic, picture and tense narrative from Martin’s confused floating in the repetitive waves and desperate journey of a few metres up the faceless rock. I was immensely impressed by the imaginative attention that allowed him to conjure for the reader the infinite variation within such a circumscribed scene.

As an example, here is a scattering of lines depicting the pebbled ledge that Martin is slung onto by the waves, and from which he tries to escape, clawing his way up and slipping down again, so as to stay above the rising tide.

But what appears at first as a tale of survival, man against nature, turns out to be something else. Or rather, to be exactly that, but turned inside out. Golding, as the end approaches, opens under the unsuspecting reader a mythical dimension, and the piece becomes above all a critical study of the character determined to survive against all odds. It may not be survival that is redemptive.

Certain details of the life Martin recalls with increasing despair, confined to his rock, recall those of Golding’s life. Some are occupational – Golding, like Martin, was at various times an actor, a teacher, a sailor – but others can be read as those that made Golding ‘aware of and repelled by the cruelty in himself‘. The courage to tongue at one’s faults, cracking open a bright white smile to reveal the decaying stumps behind, in a work to be presented to the public, is rare. This element of personal examination is presumably what gives Pincher Martin its fevered moral intensity.