Hands Off Wales: Nationhood and Militancy 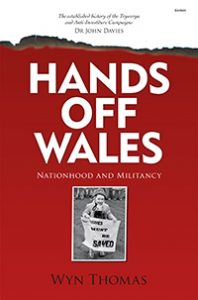 In the mid-twentieth century European colonialism was in retreat across the globe, with militant nationalist movements harrying invaders in the cause of independence in Algeria, Vietnam, Guinea-Bissau, Indonesia, Rhodesia, Ireland, Kenya, India, and more. One such movement emerged in the 1960s, involving a clandestine network of terrorist cells whose modus operandi was successfully copied by the IRA, and an apparently 7,000 strong uniformed militia. In Wales.

How could we have forgotten this? The Last War of Independence in 1400, led by Owain Glyndŵr, saw the end of concerted Welsh efforts to resist English rule. Welsh nationalism was not taken seriously for some hundreds of subsequent years, a state of affairs epitomised by a notorious early Encyclopaedia Brittanica entry:

Modern Welsh nationalism was catalysed after a number of Chartist uprisings in the nineteenth century made the British establishment wary of the region, sending a commission to inquire into the state of its education, morals and behaviour in 1846. The commissioners condemned the lot. Among the causes of Welsh ignorance and laxity they chose to cite two that were guaranteed to provoke the people’s pride: their language and their religion – Wales being at the time a stronghold of non-conformism. The incident, which came to be known as The Treachery of the Blue Books (the typical colour of government reports), inflamed nationalist sentiment. Eventually, in 1925, the formation of Plaid Cymru provided a focal point for Welsh patriotism.

One of Plaid Cymru’s founders Saunders Lewis, poet, scholar of Welsh literature, and Nobel nominee, became a national hero following the Tân yn Llŷn (Fire in Llyn) action. Penyberth was a farmstead on the Llyn peninsula with a historic role providing patronage to poets and shelter for pilgrims. In 1936, the RAF demolished it to build a training school for the new technique of bombing (then seen by many as barbaric rather than routine) in the teeth of Welsh protests. Saunders Lewis, together with Lewis Valentine and DJ Williams, burnt down the empty bombing school building and handed themselves in to police. The precedent for militant response to English high-handedness was set.

When the Tryweryn Reservoir Bill of 1957 passed, thoughts turned again to militant action. The Liverpool Corporation, in anticipation of increased demand for water, had proposed the flooding of Cwm Tryweryn (the Tryweryn valley), entailing the abandonment of Capel Celyn, the village it sheltered. Each of the hundred and twenty five Welsh councils, 35 of the 36 Welsh MPs, and many other campaigners opposed the plan. Virtually the entire population of the valley travelled to Liverpool with polite placards – ‘Please Liverpool, be a great city and not a big bully’ – but were turned away from the Town Hall and had rotten vegetables thrown at them in the street. The passing of the bill was, said Gwynfor Evans, the leader of Plaid Cymru, ‘a declaration by the English majority in parliament [that it had] the power to destroy Wales’.

The smack in the face this was for Wales was compounded when the long term decline of Liverpool’s population and industry led to the city having considerably more water than it could use. Which it then profited from by selling it on to other city corporations.

It was around this time, frustrated by the failure of constitutional means, that the Free Wales Army formed. The FWA claimed 7,000 members, ran military training exercises on remote Welsh mountains, was supplied with arms by the IRA, and trained dogs strapped with magnetic explosives to engage tanks – although, it must be admitted, little of this was true.

The FWA was primarily an instrument of propaganda. It did not have a regiment of canine suicide bombers. Its membership was an order of magnitude smaller than claimed, at least. It did have a small cache of arms procured through Irish Republican contacts, but they were never used. Its exercises were staged for publicity purposes.

What it mostly did was distribute cards and leaflets in support of Welsh independence, paint slogans on walls and fences, and bullshit the media. Invited by Sinn Féin to commemorations marking fifty years since the Easter Uprising, FWA members coincidentally made the journey home in company with Welsh rugby fans returning from a Five Nations match in Dublin. They proceeded to hoist the Y Ddraig Goch in place of the Union Jack and commandeered the tannoy to announce that the FWA was in control and the ferry would ‘now be heading for Patagonia’, a region of Argentina blessed with Welsh settlers.

There was a playfully shambolic aspect to the FWA that I find appealing, but balanced against that is the concern that if their fake news had gained any real traction, the results may not have been so amusing. Other Welsh nationalists, particularly Plaid Cymru, found the preening of the FWA a tiresome distraction. On a still a darker note, some FWA members had fascist sympathies. Still, despite its talk of terrorism, the movement was largely non-violent (attempting a single bomb attack on a water pipeline, which was characteristically botched), and reportedly reined in some of its more aggressive members.

More serious was the 1963-69 Mudiad Amddiffyn Cymru (MAC, or Movement for the Defence of Wales) bombing campaign targeting reservoir construction sites, pipelines, tax offices, police stations and army barracks. MAC targeted infrastructure and took care that explosions should occur late in the night to minimise the chance of any casualties. Nevertheless, two presumed MAC members were killed when a bomb went off prematurely, and a ten year old boy disturbed a device that had until then failed to go off, suffering severe burns and losing a leg.

MAC carried out twenty attacks, the authorities becoming increasingly desperate to crack their effective structure of independent cells, soon emulated by the IRA. Desperation increased as the first of July 1969 investiture of the Prince of Wales approached. To be seen to be doing something, police arrested FWA leaders, who were defended in court by the-not-yet-Sir John Mortimer, later famous as the creator of the delightful TV (and later book) series Rumpole of the Bailey, as well as for his work as a QC. Mortimer considered the trial to be ‘politically governed’ and ‘deliberately spun out’ so that convictions coincided with the date of investiture. MAC was finally disrupted late in 1969 when its leader, John Jenkins, was sentenced to ten years imprisonment – a remarkably light punishment from the perspective of the twenty first century.

Militancy always carries with it the threat of escalation, and some among Welsh nationalists did at times wish to provoke the authorities into heavy-handed responses that might draw sympathy to their cause. And yet it can be effective: military action, after all, is why Wales is part of the United Kingdom. Since Capel Celyn, although new reservoirs have been created, no communities have been drowned and the Welsh nation has gained significant political power. While a good deal of these achievements can be attributed to the peaceful and constitutional campaigning of groups like Plaid Cymru, surely the threat of militant action had an influence.

Speaking of this debate, John Jenkins said that: ‘Ghandi’s pacifism could and only did succeed because Nehru’s more militant campaign was running parallel with it.’¹ And more topically, the centenary celebrations of the Suffragette movement are generally quiet with regard to the vandalism, arson, chemical attacks and bombings carried out by its militant wing. While a minority of Suffragettes, its members included many senior figures.

I do not advocate violence, and certainly not bomb attacks, but I find it hard to disagree with Frederick Douglass, the African-American anti-slavery activist, in his West India Emancipation speech: ‘Those who profess to favor freedom and yet deprecate agitation are men who want crops without plowing up the ground; they want rain without thunder and lightning. They want the ocean without the awful roar of its many waters … Power concedes nothing without a demand. It never did and it never will. Find out just what any people will quietly submit to and you have found out the exact measure of injustice and wrong which will be imposed upon them, and these will continue till they are resisted with either words or blows, or with both.’

Though violent Welsh nationalist protests continued until the early 1990s, most prominently in the form of over 200 arson attacks on English-owned holiday homes, incentives for militancy in Welsh nationalism have greatly diminished following the 1997 referendum that led to the creation of the Cynulliad Cenedlaethol Cymru (National Assembly for Wales). However, nationalism itself still has a clear voice. Plaid Cymru continues to be prominent in Welsh politics and is constitutionally committed to Welsh independence, while YesCymru, a new non-party political campaign group, officially launched in 2016.

The commitment of the Home Nations to the United Kingdom is currently being more severely tested than perhaps at any point since those regions of Ireland that form its Republic regained their freedom. After the UK vote to leave the EU, a second referendum on independence for Scotland has been mooted, and the status of Northern Ireland post-Brexit is uncertain. In this climate, political awareness of the historical roots of Home Nation disaffection is desirable, but in England is typically shallow.

Whether it’s the transportation of Irish and Scottish resistance fighters and political or religious dissidents as slaves and indentured labourers to colonies in the Americas; the ethnic cleansing of the Highland Clearances; the Irish potato famine, during which only the peasants’ own potato crops failed, while abundant produce of other kinds was exported to England; or the displacement of Welsh communities for the convenience of English water supply: we English forget fast.

On whichever point of the political spectrum you stand, ignorance of the memories, interests and inclinations of the peoples that make up a nation can only lead to false steps when those peoples come to negotiate power. For that reason, I am glad for Wyn Thomas’ Hands Off Wales and the story of a home-grown terrorist campaign I had never heard of.

¹ There may be an error on Jenkins’ part here, as I’m not sure Nehru was involved in militant rebellion. However, militant nationalism does form a part of the history of Indian independence.