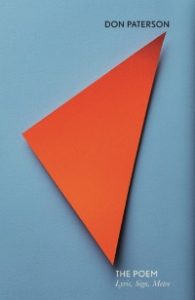 Is the ground of poetry, Don Paterson tells us. We know it’s a poem because of the white space around it, the textual equivalent of silence. A poem doesn’t fill the page ‘and therefore considers itself rather important.’ And so do we – as soon as we see that space we are primed to dig deeper than the literal sense of the words within it, mining for the hidden meaning.

When we mine beyond the literal, what is there to find in language? Well, imagine you’re an ambassador sent from Earth to the Galactic Council and you’re about to go into a meeting with representatives of two alien civilisations, ‘one beautiful and friendly to humans, the other unfriendly, ugly and mean-spirited … one of these groups is called the Lamonians; the other is called the Grataks. Which is which?’

Or, to take another example, one of these shapes is called a Maluma, the other a Takete: which is which? 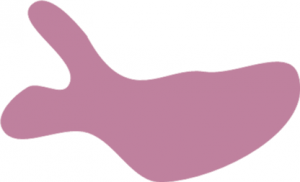 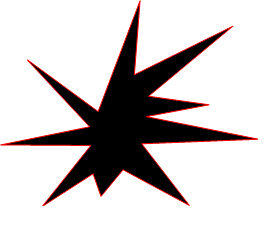 Researchers have asked a lot of people questions like these, and the overwhelming majority put the spiky shape and the grumpy aliens together with the staccato, guttural ‘Gratak’ and ‘takete’, whereas the aliens that come in peace and the smudged shape get lumped with the long-vowelled, labial ‘Lamonian’ and ‘maluma’. This flies in the face of the widely held belief that words are arbitrary – that when we want to name something, we pick a sound at random and simply agree to give it that meaning.

Recent study suggests that words are often in some sense iconic – that their sound, or the shaping of the sound with the mouth, is related to their meaning. ‘Glisten, glare, glow, glower, glint, gleam, glaze, gloss, glance, glitter … glass‘: the theory is that the inclusion of the gl- sound in so many words to do with reflected light is not coincidental. It isn’t that gl- means ‘reflected light’, but that the feel of the sound touches us in a way similar to some aspect of the experience of reflected light. Sounds that are thought to have this meaningful feel are called phonesthemes.

The Poem is full of fascinating detail like this, drawn from linguistics, philosophy of language, neuroscience, semiotics and more – not to mention poetics – adding up to a comprehensive disquisition on the poem in three long essays on it’s sound (Lyric), meaning (Sign) and rhythm (Metre).

Paterson regards ‘poetry as a naturally occurring mode of human speech.’ That mode arises ‘under the dual pressures of emotional urgency and temporal constraint’: when you have only a little time to say something you strongly feel, then you emphasise rhythm and intonation more than usual. Poetry exaggerates these effects, one of which is the lengthened vowel.

In 1781 Jean-Jacques Rousseau’s Essay on the Origin of Languages was posthumously published. In it, he argued that language was first of all a kind of song expressing feeling. Only later was it adapted to convey more literal meanings. Paterson explores a resonant idea: that the vowel carries the emotional sense of speech, and that the chopping up of its steady breath by consonant introduces semantic content.

He suggests repeating only the vowel sounds in a sentence. For instance: Put that in your pocket – [u] [a] [i] [ou] [o e] (Paterson uses the phonetic alphabet, but let’s not get too technical). What you get is a sort of baby-talk, but it is easy to say, and easy to vary the pitch, length, emphasis and timbre of the sounds to suggest different emotional contexts – this is why ‘a great deal of sense can still be made of a conversation heard through a wall.’ To repeat only the consonants is not just more difficult, it seems to give no sense at all.

Whether or not speech itself began with ‘the song of the vowels’, the individual experience of speech certainly does. Incubating in the womb we hear all conversations through its wall and so ‘it seems entirely possible that iconic links between intonational contour and emotion could be forged there and then’. And when the intonational contour of any phrase is is fixed by repetition (as is not uncommon in poetry) the result comes to seem musical, as in the speech-to-song illusion, in which, when a phrase is looped over and over, ‘the speaker appears to be clearly singing the phrase’.

Professor of Psychology, Diana Deutsch, who named the speech-to-song illusion, favours a Rousseauian theory of language: ‘My very strong bet is that western tonal music and English language both evolved from a protolanguage that had components of both music and speech. Then it divided. Music became more for emotion … and speech to convey information’. In the same article, Between Speech and Song, from which that quote is taken, another scientist describes parents’ baby-talk as a kind of ‘musical speech’, adding that infants ‘seem to get the messages in music earlier than meaning in language’.

For having learnt all this about the relation of song to speech and sound to meaning, why not treat yourself to a sonorous reading of Poem in October by its author Dylan Thomas?

While there is much that is interesting and accessible to learn from the book The Poem about the context of the art form the poem – why it is what it is – it must be acknowledged that this is also an academic work that delves into the nuts and bolts of how poems do what they do. Paterson is a touch embarrassed at this aspect of his book:

It’s true that The Poem does contain sentences like this:

‘Extreme metalepsis sometimes looks and even feels as though a domain has been jumped; but it’s a different cognitive operation, and is a form of extended metonym, because it’s ultimately just derived from a peristasis.’

However, Paterson preempts criticism with an endnote titled ‘A brief defence of jargon’, pointing out that it is no more than a professional shorthand which is perfectly clear to those who have learnt it. Once you’ve got your head round how Paterson uses the terms ‘metalepsis’, ‘domain’, ‘metonym’ and ‘peristasis’, the above sentence presents no great difficulty (no, don’t ask me, I’d have to look them up again).

But that makes it sound like Pateron’s no fun, and for those of a literary bent, he very much is. ‘I have done my best to curb my footnote addiction and have completely failed. I like footnotes … I often get distracted by something that interests me, and can see no good reason not to pursue it some small way.’ That’s my kinda guy.

If you’re prepared to put a bit of effort into this book, there’s much reward to be had, and many illuminating nuggets of knowledge. For instance, the typical poetic line (in English at least) constantly varies stressed vowels, so that each stands in contrast to the one before and after. Because otherwise, assonance, the ‘rhyming’ of vowels wouldn’t stand out. Here’s one of his examples:

‘… You can see how it was:
Look at the pictures and the cutlery.
The music in the piano stool. That vase.’

Home is So Sad – Philip Larkin

Not only does poetry tend to vary stressed vowels, it tends to increase their number. As we’ve learned, long vowels are expressive of emotion, and so to make your poem expressive you want plenty of them – and hardly any schwa. I know, me too: didn’t I tell you there’s plenty to learn here? Apparently, schwa means the vowels you slur past when you’re speaking quickly. Paterson explains:

‘Schwa has its roots in the word for “nought” in Hebrew, and its nondescript little grunt can be substituted for any written vowel, if it occurs in an unstressed position: the “a” in “abet” and “petal”; the “e” in “bagel; the “i” in “stencil”; the “o” in “arrogant” or “condition”; the “u” in “crocus” and the “y” in “satyr”, and so on. In rapid speech, their numbers multiply. Schwa by definition can’t be stressed or sustained; it’s no more possible to sing a long schwa than it is to play Gregorian chant on the banjo.’

The curious titbits I’ve shared here are part of longer arguments Paterson presents. Notable among these are his theory that poems generate an emergent symbolic meaning from the interaction of the reader, or listener, with the written, or spoken, poem; and his method of interpreting the rhythm of a poem, which works with the productive tension of the implied metre and the natural stress of the words and phrases used.

But to get a grip on these substantial reasonings you’d really have to read the book, a course of action I heartily recommend.