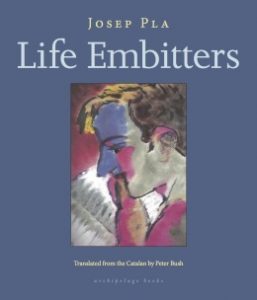 The name of Catalan Josep Pla drew a lip curl from my Catalan friend – followed by grudging acknowledgement of his status as distinguished author. The lip curl was for Pla’s politics.

When General Franco made war on his own government, Pla took the side of the rebel fascists. For that, republicans threatened to kill him and he escaped the country in company with his fiance – a spy for Franco. He returned when the civil war had all but been won, only to find that the dictatorship he had supported banned his native language and censored his work.

Hence, even today, Pla has an ambivalent status – not unlike that of the Norwegian Knut Hamsun, whose novel Hunger has featured in these pages. Fêted as among Spain’s greatest modern writers, Pla has also at times been neglected due to distaste for his fascist sympathies.

These do not make any conspicuous appearance in Life Embitters, on the contrary, Pla writes of the ‘mendacious harangues’ and lunatic fanaticism’ of the Florentine branch of Mussolini’s Fascio di Combattimento. But this is only in passing. For an author whose life provoked political controversy, his book is remarkably free of it. It’s an open question in what measure that may be due to artistic choice or to Franco’s censors.

Pla is one of those, he says in his preface, who ‘feel like vague, insubstantial shadows hovering briefly over this earth’; ‘I’m a complete unknown as a person.’ ‘If one supposes I have any human, literary, or other pretensions – something hard for me to confirm’; ‘my work is … reminiscences of the ashes of life.’

These observations – and the title! – are liable to make us fear the book itself will be melancholic and miserable. The effect, for me, is more one of distance, though that does perhaps suggest a depressive stance. The text, written when Pla was young, revised for publication when he was old, seems a precursor of the oeuvre of Geoff Dyer, falling somewhere between short fiction, travel writing and autobiography. But autobiography with little of the author in it.

Pla appears implicitly as the narrator of each piece, and is occasionally named as such. His journalistic eye observes characters, colourful incidents, towns and landscapes. But there is not much in the way of character arc or dramatic resolution. We see his judgements; rarely his actions. And on two of the few occasions in which he becomes an actor in one of his stories – two of the most affecting in the collection – the decisive moment is his failure to act.

In one of these, Roby or Deflation, the narrator’s brother admonishes him for the rootless existence that allows telegrams accurately addressed to his boarding house to be returned with the words ‘not known’. The narrator, worrying about his apparent anonymity, bumps into the other lodger of the house, who drunkenly reels off the shameful anecdote of his failure to intervene in the beating of Roby, the lame and neglected child of the establishment.

Our narrator is disgusted – but soon finds himself in the same position, a hand on the handle of the door to his landlady’s rooms: ‘something had smashed against the wall – probably the boy’s head … I don’t remember how long I stayed like that by the door, full of indignation and pity.’ The reader is no more spared than the boy: there is no heroic rescue. The boy runs bleeding from the house and the narrator shadows him, wanting to watch over and protect him, yet unwilling to break from the shadows and make human contact. In the end the narrator remains unknown.

To have the protagonist recapitulate the failure of a minor character is a bold move and Deflation is an accurate title. I find the story moving and human, if downbeat. This is the sort of life that embitters. But I said that the book is distant, austere, rather than miserable, and am not so far proving my point.

Afflicted by the hyperinflation of 1920s Berlin, Pla’s friend and colleague Eugeni Xammar enlists him in a resistance movement to the ‘fantastic accumulation of ersatz products’ churned out cheaply by the new factories at the birth of the consumer age: ‘We must create a lobby and oppose attempts made by any form of margarine to infiltrate our bodies.’

To maintain a fresh and full-fat diet, leaving the novelty of canned goods on the shelf, the pair cultivate their credit-worthiness by purchasing a dog: ‘When you go shopping, the shop assistant … will say: “You, sir, are the man who owns that dog, that fantastic dog…” And they will give you a fetching smile. You have become that gentleman who has that dog’.

Here I’ve jumped straight over austerity, going from misery to humour. Pla’s austere tone is perhaps best represented in a tale that may at first seem among his most whimsical. The sight of a penguin (I rather wonder whether Pla, or his translator, meant a pelican) eating a sparrow leads to A Conversation in St James’s Park, a conversation which eschews the sentimentality of ‘fantastic explanations … of why humanity suffers so’ on the basis that ‘God does not punish sparrows’. Sparrows are simply eaten. In like manner, Pla implies, the incidents of our human lives are neither punishment nor reward.

This rejection of a hidden order is as close as Pla gets in this book to postulating a worldview. He prefers to report what he has witnessed, ever the good journalist, and leave the rest to us. He obsesses over description, unafraid of the adjective (unlike many contemporary authors). Here he is on Flanders:

‘The country is as flat as a hand; like blue down, a barely perceptible veil of darkness sheaths the fields’ infinite shades of apple green … Tall slender trees stand to attention along the canals, shadows from their unstill leaves tremble over the water. Changing and ineffable, the wondrous gray-green sky quivers and frolics, voluptuous yet melancholy in the dense, sleeping water … A barge daubed with tar leaves a hazy trail of light … The sun hides behind a creamy pink cloud, a stray beam strikes a distant purple downpour and that vaguely opaque eyelid covers the earth once again and shrouds the glittering waters.’

It’s lovely stuff, though I feel the mania for accuracy has diminishing returns, given much depends on the imagination of the reader. At least, I struggle when this forensic level of description is applied to people:

‘His forehead was rather narrow and depressed, his large ears stuck out, his bulging bloodshot eyes floated in yellowish lymph, his mustache was a handlebar, his jaw slightly jutted, his skin was pallid though his mouth and nose were normal – jarring with the general makeup of his face and thus peculiar, his legs were bandy like brackets.’

For me this creates an optical illusion, if that’s the right phrase for something one sees in the mind’s eye. No doubt Pla carefully observed real physiognomies, and his characters, fictional or not, are as lifelike as the anatomical sketches of Old Masters. But I normally don’t study people’s features so intently.

There’s not much to notice in one’s mouth – bear with me here – until something changes. When a tooth is removed then, though the vanished molar was a normal size, the gap it leaves seems ENORMOUS and the tongue can’t ignore it. In much the same way, as Pla draws my attention to each of these individual details of a whole face or person, they swell larger than life, like I’m looking at them in a circus mirror.

By the end of the book, despite having been shown many quirks of human nature, many people and places, many slices of life convincing in their blunders and abruptness, I felt that I’d seen them largely from the outside looking in. Perhaps that distance is Pla’s intended affect, the cool irony that embitters life.