People From The Other Side: 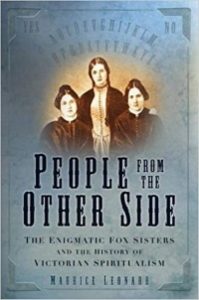 the Enigmatic Fox Sisters and the History of Victorian Spiritualism

In the University Library at Cambridge lies a specimen of ectoplasm recovered from an eventful séance presided over by Hellish Nell. At this 1939 meeting, the curiosity of Mr A J Miles was so far piqued that he recklessly abandoned the unspoken etiquette of Spiritualist sittings and made away with a portion of the Spirit stuff the medium had laboured to materialise. Nell understandably took exception to this impropriety and ‘punched Miles in the eye to retain ownership of [it], but in vain.’

Mr Miles found that the substance ‘was damp’ but he ‘did not examine it owing to the terrible odour that was issuing from it.’ However, he noted that the ectoplasm was here and there smeared with what seemed to be blood, though he could not be ‘sure whether the stains were fresh.’ Applying his powers of deduction, he thought that ‘the smell of it quickly suggested where it had been concealed.’

More thorough investigation of the phenomenon, later carried out at the Society for Psychical Research by a Mrs Goldney, confirmed the Miles hypothesis. It was established that this emanation from another world had taken on the appearance of ‘a large piece of white satin, or perhaps cotton silk, measuring eighty by a hundred centimetres, faintly stained at regular intervals.’ And that these stains ‘were caused by the cloth being folded and secreted in the vagina where blood seeped in.’

I am not a dogmatist in matters of belief, and don’t go out of my way to not believe in ghosts, spirits or what have you. But nor, on the other hand, do I believe in them. And largely because I’m not sure what difference it would make one way or the other. My approach to claims of clairvoyance, telekinesis and the panoply of psychic phenomena in general, is: alright, let’s say it’s true – what follows?

We can ask this of self-styled mystifier and originator of spoonbending, Uri Geller, an evangelist of the power of the mind.1 Should the circumstance occur that having a bent spoon becomes imperative, I’ll bend that spoon using the power of my body. Some years ago a friend told me that she was considering visiting a fortune teller and asked me what I thought. The gist of my reply was, ‘what would you gain by knowing the things that are going to happen to you?’ Sometimes the mystery of the thing (apparently) done short circuits any question of what is actually being achieved.

At a certain point in this book, we discover that Madame Blavatsky saw, in war between the Ottoman Empire and its European enemies, confirmation of a prophecy reportedly made by the Little Prophet of Saar Louis. The prophecy was this: ‘I have been sent into the world to tell you that 1875 will be a good year, but that 1876 will be a year of blood.’

I imagined myself on the shoulder of a person whose village was caught up in this conflict. Into their ear – perhaps while they are witnessing the killing of friends or family – I whisper portentously, ‘Last year a new born baby predicted that this would happen.’ My interlocutor, a little distracted by the fire turning their home to ashes, responds, ‘Right, yeah, that’s very helpful, how wonderful that such a prophet was sent into the world, thanks.’

I picked up People from the Other Side in a job lot being sold off by my local library and found myself with a popular history written by someone who grew up among mediums and has spent many years sitting in Spiritualist circles. Not the sort of academic work I would have chosen had I set out to find an account of the birth of Spiritualism.

Still, Leonard is an amiable narrator, with a disarming way of acknowledging the earth-bound explanations for what are presented as psychical phenomena and a playful approach to the unexplained. Or that’s how I felt until I’d reached almost the end of the book. Then the differing approaches of the scholar and the believer became apparent.

On 29 March 1848, in Hydesville, New York State, the Fox family was disturbed by mysterious knockings in the night. These seemed to centre on young Kate and Maggie Fox and it was soon discovered that they would respond to questions with two raps of affirmation. The parent Foxes were at a loss and afraid and invited neighbours in to witness the strange noises.

Between them they interrogated the entity producing the raps, which disclosed that it was the spirit of a Charles Rosna, cruelly murdered in that very house some years before. This news caused consternation and began the local celebrity of the Fox sisters, celebrity that would before long become international.

At this point, the girls acquired a manager. Their sister Leah, older by some twenty years, moved them in with her and arranged private and public exhibitions of converse withe the dead. These aroused a good deal of controversy and scepticism, even from within the family. Leah’s daughter Lizzie laughed at the rapping and was once heard to ask, ‘Why do you keep this up? I’m sick of it.’ Lizzie was sent off to stay with a friend of Leah’s.

The Spirits were now sending messages suggesting a grander mission than that of Rosna’s personal revenge: ‘Dear friends, you must proclaim these truths to the world. This is the dawning of a new era and you must not try to conceal it any longer.’ By this time they had already begun to reveal themselves to other mediums.

At the height of their fame, the Fox sister’s were living the high life in New York, had toured the US and Europe, were consulted by Governors, judges and bankers and had the dubious benefit of Sir Arthur Conan Doyle’s approbation. Horace H. Day, a wealthy businessman, bought a building on Broadway to serve as the offices of the Society for the Diffusion of Christian Spiritualism, which printed its own pamphlets, housed a library and ‘employed mediums whom the public could consult free of charge every morning for five days a week.’ Kate Fox was one of them.

Leah, by now a medium herself and moving in exalted circles, was joined in matrimony to Daniel Underhill, President of the New York Fire Insurance Company, and rich. The elder Fox sister retired from public seances, a not wholly respectable occupation for a married woman, and left the younger two to look after their own careers. These were flagging.

The buzz surrounding discovery of the sisters had died down and there were now many competitors promising spectacular feats of psychic manipulation. Maggie in particular was struggling. An on-off romance with upper class Elisha Kane had been turned definitively off by his death. Elisha had never believed in Spirit and in her heartbreak Maggie began to turn against her profession. Both sisters followed their father into alcoholism.

Then Maggie published The Death Blow to Spiritualism. She and Kate had tied a string to an apple and dropped and tugged it about on the boards beneath their bed. Their credulous mother, not suspecting her children might be playing a trick, gave them a great deal of fun. Then the neighbours got involved: more fun still. And then Leah arrived.

Maggie and Kate confided in Leah, who told them they must keep up the act under her direction. ‘This old woman made us her tools,’ said Maggie. Witness statements had been crafted for their parents to sign. Their father John, who was at no time a believer that Spirits were responsible for the goings on, had taken some persuading. Under pressure to perform in public, the girls had hit on the knack of clicking their toes, so producing noises whose cause was not immediately apparent.

Confused by the mass hysteria their lie precipitated, Maggie had gone alone to graveyards, late in the night, in futile attempts to commune with the dead. The dead never spoke to her – most painfully, her dead love Elisha never spoke to her. Her belief was that, ‘Under the name of this dreadful, this horrible hypocrisy – Spiritualism – everything that is improper, bad and immoral is practised.’ Of Leah she wrote, ‘My damnable enemy. I hate her. My God! I’d poison her.’

She had not suffered enough yet. The printing of The Death Blow to Spiritualism, and a tour demonstrating the tawdry reality of ‘spirit rapping’, were a mea culpa, but also another way to make a living. Predictably, debunking was not as big a draw as mystery and the money soon ran out. With no other means of support, the unmarried Maggie and the widowed Kate both felt obliged to swallow their hypocrisy once more. They recanted their recantations in order to make the few dollars they could as faded mediums with tarnished reputations.

Leonard hand-wrings over the tragedy of the sister’s lives yet lost me – made me angry – by failing to acknowledge the obvious and crass exploitation perpetrated by Leah. When Lizzie, her own daughter, became fed up with the sham, Leah sent her away rather than risk exposure. Leonard’s sympathy for Maggie’s evident torment over her profession seems shallow given he fails to recognise how empty the whole enterprise was.

‘Because she had rapped with her foot, and undoubtedly had done so many times, did that account for every occasion?’ Leonard asks. He goes on: ‘Maggie’s denunciation, made in spite toward Leah and as an attempt to redeem herself in Elisha’s dead eyes, came when she was mentally ill and does not invalidate her previous record when she left audiences astounded by her accuracy.’

I am open to all sorts of possibilities, including some that others may consider irrational. But in the case of the Fox sisters, and the Spiritualist movement that developed from their legend, Leonard willfully closes himself off to a possibility that does not require (as the Spirits do) the cover of darkness, but instead stares him in the face.

1 Mr Geller recently published an open letter to Theresa May, promising to prevent Brexit telepathically. He was once a neighbour of May’s and notes in his letter that, ‘Three years before you became prime minister, I predicted your victory when I showed you Winston Churchill’s spoon on my Cadillac, which I asked you to touch.’