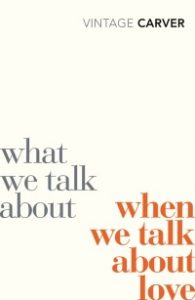 Alcohol and violence swill through the stories in this collection. Alcohol lets thoughts and feelings flow. Or blots them out. Violence says the things that men can’t, emotional mutes. Literal mutes in the case of Dummy, who kills his wife with a hammer.

Before #MeToo, Carver was chronicling the violence that men wreak in revenge of their desire for women. In the space of seventeen stories, five women are subject to psychosexual murder (to forestall the inevitable cry of ‘not-all-men’ and restore the cosmic balance of the universe, let it be known that one character has been shot by his wife and now walks with a limp).

Lest he seem too much the hero, Carver was an alcoholic who once clubbed his wife with a wine bottle. In his stories, angry men are not explicitly condemned, but neither are they spared. The desperation and cruelty of their actions are laid bare, and one wonders what demons were stared down in their writing.

Carver had a famously laconic style, in the great American tradition of writers such as Raymond Chandler, John Steinbeck, and the daddy of them all, ‘Papa’ Hemingway. The laconic can be seen as masculine – unfussy, stoic, and disciplined in contrast to the (perceived) loose chatter of the feminine. But there are moments in Hemingway, in Chandler and in Carver, where it seems that the lack of words is a surrender, like Job before God. In ‘The Bath’, from this collection, a child falls into a coma and his parents watch over him in the hospital:

‘The husband sat in the chair beside her. He wanted to say something else. But there was no saying what it should be. He took her hand and put it in his lap. This made him feel better. It made him feel he was saying something. They sat like that for a while, watching the boy, not talking. From time to time he squeezed her hand until she took it away.’

The emotional pain of a scene may be so overwhelming that it simply doesn’t need to be pointed out to the reader, and in any case, it may exceed the power of words to express it. Perhaps this is still a masculine response: helplessness in the face of deep feeling, the revealed vulnerability that the macho posture spins as strength.

But it must be said that Carver himself wasn’t wholly a fan of his minimalist style, much of which was imposed on him by his long time editor. Gordon Lish tore chunks out of Carver’s stories – without him this book would be about twice as long. Carver later set himself to publish the original versions, a task taken on and completed by his widow, Tess Gallagher. Nevertheless, this collection, in this format, remains his most famous. It would be an interesting exercise to compare the two. For a start, you can read ‘Beginners’ in the New Yorker, Carver’s draft of the title story from this book.

The abruptness of these tales, their unwillingness to explain themselves (often, Eileen Battersby argues, a result of Lish’s editing) sometimes left me cold. In ‘Popular Mechanics’ the studied unsentimentality slips into ridiculous melodrama when a couple stubbornly fight over custody of their child. These are the very last lines:

‘She caught the baby around the wrist and leaned back.
But he would not let go. He felt the baby slipping out of his hands and he pulled back very hard.
In this manner, the issue was decided.’

For me, it was the title story that redeemed the collection. Many of these pieces are bleak examples of love that has faded, or twisted, or has been broken. But here and there Carver gets across the sense that even in strained relationships, when acrimony and disillusion have crept in, perhaps all but taken over, love may abide. ‘What We Talk about When We Talk about Love’ manages to demonstrates the intimacy that is love, though the characters can’t explain it, though it doesn’t guarantee happiness, nor even sanity.

An older couple and a younger couple sit around a kitchen table, having a few drinks, and talk about love. The elder pair tell stories of previous loves, they bicker mildly, they become maudlin. They love each other, but they have loved before, and if one of them died they would hope the other would love again. What is this love, at once so possessive and so changeable? They talk around it as the shadows lengthen, the gin dries up, and so, eventually, does the talk. They have come to no conclusions. But in their acceptance of each other’s experience and limitation, by attending to each other, they have allowed love to emerge:

‘I could hear my heart beating. I could hear everyone’s heart. I could hear the human noise we sat there making, not one of us moving, not even when the room went dark.’

This sounds like prayer, and I was minded of the sacred intimacy that sometimes descends when two or more people, whether there is understanding or not, are truly present together.