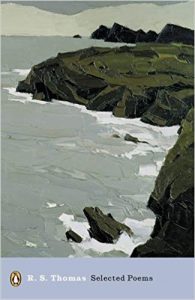 Austere is the word that springs to mind. Even R.S. Thomas‘ tender poems are of fleeting moments carved from hard-scrabble lives. Physical or spiritual toil is the default mode of life and any unexpected communion with a human soul or the glory of god is almost too brief to be counted on. Take these lines from Tenancies:

‘This is pain’s landscape.
A savage agriculture is practised
Here…’

Or these from Hill Christmas, where after a priest, perhaps not unlike the priest-poet Thomas, has delivered Mass, the congregation returns to their homes on the Welsh hillsides:

‘They rose and went back to their poor
holdings, naked in the bleak light
of December. Their horizon contracted
to the one small, stone-riddled field
with its tree, where the weather was nailing
the appalled body that had not asked to be born.’

Or – sweet Jesus – this from The Island:

‘And God said, I will build a church here
And cause this people to worship me,
And afflict them with poverty and sickness
In return for centuries of hard work
And patience.
…
All this I will do,
Said God, and watch the bitterness in their eyes
Grow, and their lips suppurate with
Their prayers.’

I mean, just look at the man:

But it must be said that Thomas is not quite so one note as all that. In fact The Island finishes with the deadpan punchline, ‘And that was only on one island.’ Thomas wants us to confront our forsaken-ness, as he confronts his, to spur us to the work required for the salvage of our souls. And he won’t sugar-coat it, he won’t clap happily and tell us that all manner of thing shall be well. Nevertheless, in this poem he lets his scowl slip just slightly to reveal a measure of grim glee.

Thomas relishes his Calvary, the taut effort of his spiritual practice, and disdains those who don’t. He’s the religious equivalent of those masochists who profess to enjoy running marathons. He berates us for our own good, the ornery old coach under whose tongue the teen hero chafes – until one day he becomes the champ.

‘Now
in the small hours
of belief the one eloquence

to master is that
of the bowed head, the bent
knee, waiting, as at the end

of a hard winter
for one flower to open
on the mind’s tree of thorns.’

Thomas was bitterly Welsh, resentful that he learned the language too late, in his 30s, to write poetry in it and contemptuous of the acquiescence of his people in the turning of their country into a heritage theme park. When Meibion Glyndŵr began burning down holiday homes to protest the pricing out of Welsh locals by the rich English, Thomas said: ‘Even if one Englishman got killed, what is that compared to the killing of our nation?‘

He envisaged the Welsh nation drowning, as people have in:

‘…other places where on as deep a sea
men have clung to the last spars of their language
and gone down with it, unremembered but uncomplaining.’

A fine poem deals with the displacement of Welsh communities to create a water supply for English towns and cities, such as at Tryweryn, an event that led to the creation of a militant Welsh nationalist movement:

There are places in Wales I don’t go:
Reservoirs that are the subconcious
Of a people, troubled far down
With gravestones, chapels, villages even;
The serenity of their expression
Revolts me, it is a pose
For strangers, a watercolour’s appeal
To the mass, instead of the poem’s
Harsher conditions. There are the hills,
Too; gardens gone under the scum
Of the forests; and the smashed faces
Of the farms with the stone trickle
Of their tears down the hills’ side.

Where can I go, then, from the smell
Of decay, from the putrefying of a dead
Nation? I have walked the shore
For an hour and seen the English
Scavenging among the remains
Of our culture, covering the sand
Like the tide and, with the roughness
Of the tide, elbowing our language
Into the grave that we have dug for it.’

Thomas’ severe passion and unsparing eye shine through. In the manner of a searchlight picking you out from the dark you’d tried to escape into. Typical of his no-one-gets-out-alive theology is the fact that this poem, full of indignation at the exploitation wreaked by the English, ends with a condemnation of the Welsh, and of himself with them.

The poetic persona Thomas projects brings to mind the Mexica god Tezcatlipoca, rather wonderfully known as ‘the enemy on both sides’. His God is the God-the-father (Jehovah, Saturn, Kronos, etc.) of Walt Whitman’s Chanting the Square Deific:

As well as unbending rectitude, Reservoirs displays the qualities of the best of Thomas’ writing: direct language, challenging thoughts and powerful images, stark but still beautiful. The farms with their smashed faces and stone tears are both a fine metaphor and immediately visual. These are the features which hint that Thomas isn’t as inexorable as all that, that, now and then, he’s open too to the other sides of God chanted by Whitman.

Reading straight through these selected poems reveals that Thomas’ themes were tightly circumscribed: bleak lives on bleak hillsides; an unfathomable God, the search for whom yields scarce consolation; and the temptation of the Machine, his symbol for the emptiness of the modern world with its air-conditioning and radiation. The sustained focus meant that the more poems I read, the more their impact was diluted. Nevertheless, what’s good in here is excellent.

If Thomas was cantankerous (in his life as well as his poetry – he has been called ‘the ogre of Wales‘), it was because he was wrestling with himself and his God to approach and be worthy of something he had tenuous intimations of: ‘a love fiercer than we can understand.’ And occasionally in his poems, as presumably his life, his diamond hard attention breaks the surface of the mind it mines to discover, for however short a time, a true serenity. As when in Arrival, in response to Eliot, there is:

‘…a traveller
with the moon’s halo
above him, who has arrived
after long journeying where he
began, catching this
one truth by surprise
that there is everything to look forward to.’